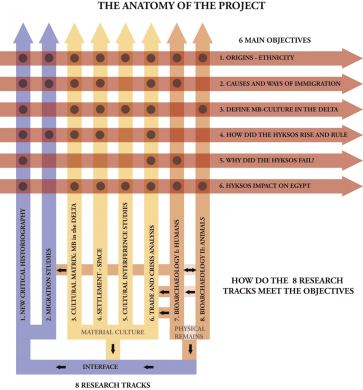 RT 1 acts at the same time as the project’s interface where all available data from the other RTs will be collated for evaluation. Hence mainly texts and onomastic material were evaluated for historiography. All available onomastic data of the presumed western Asiatic population who lived in the eastern Delta during the Middle Kingdom (MK), the Second Intermediate Period (SIP) and the New Kingdom (NK) will be closely inspected again concerning hints for its region of origin. In addition to this all archaeological and scientific data collected in the other RTs will be critically analysed as potential historical source material.

For the first time in history there is clear evidence of the immigration of a substantial number of Near Easterners into the eastern Nile Delta. This opens the possibility for a phenomenological study of immigration from the Levant to Egypt which will help understanding the Hyksos enigma. In addition, this approach will comprise the study of available pollen profiles from Syria, the Jordan valley and the dates of Dead Sea levels. This will elucidate if changing climatic conditions in the 2nd millennium BC forced migration. The results of RT 7 (physical Anthropology, DNA and Sr isotope analyses) will be incorporated.

The material culture, as previously assessed at a series of Eastern Delta sites, allows us now to compose a complete synchronic and diachronic ‘grammar’ and ‘lexicon’ of the Near-Eastern settlers in this region from the late 12th to the 18th dynasty. This RT aims at establishing a comprehensive matrix of all features of the hybrid MB culture in the Delta including material culture and behaviour pattern. As a result it will be possible to identify the origin of recurring combinations of cultural markers, especially if the objects were produced locally, but their original (foreign) forms were kept.

The location of MB sites in the Delta reveals a core area of Near Eastern settlers along the eastern water courses and land routes. The rapid expansion of Avaris from a town of moderate size of 50 to 250ha at the beginning of the Hyksos period demonstrates the potential of spatial analysis of this urban site. The highly dynamic development begs for an explanation, be it economical, political or both. Another approach is a comparison of intra-site settlement patterns of the hybrid MB sites in the eastern Delta with other Egyptian settlements. This will reveal the degree of acculturation of the settlers with regard to the Egyptian culture. Integration of tombs within settlements is already the first indication of difference. Scaled settlement mapping offers clues to settlement hierarchy and sometimes even indications of polities.

One has to take into consideration a gradual acceptance or rejection of Egyptian culture by analysing the settlements, the architecture, the tombs and burial customs in combination with material culture. The stratigraphy within a settlement will show several stages of acculturation. Pilot studies seem to indicate that after a rapid takeover of Egyptian cultural features in an early stage, the acculturation process stalled or was even reversed already during pre-Hyksos times. An interference study examining what impact western Asiatic communities had on the NK is important as well and a new field of expertise, in particular concerning Canaanite cults flourishing in the 18th Dynasty. Innovations in weaponry, tools and technologies were clearly taken over from the late MB, and there are many other cultural innovations in NK Egypt that appear a priori like genuine Egyptian developments, but may – in essence – be the results of the Hyksos interference.

Artefacts collected within a stratigraphic series such as at Tell el-Dab‘a offer the possibility of comparing inter-site stratigraphy and establishing synchronisations. They also enable the study of economic developments by quantifying imported trade containers from the Levant, Cyprus, the Aegean, the Sudan, the oases and Upper Egypt. The statistical evaluation of this material will allow the recognition of positive or negative trends in trade and possible periods of crisis. Complementary to these organic residue analyses of the contents of vessels will reveal what commodities were transported in these containers

All available physical anthropological data of MB populations in the Eastern Delta and the Levant will be collected for cluster analyses based on osteological data. Previous studies have suggested that there is a good chance to pinpoint similarities and differences between Egyptian and Near Eastern skeletal samples. Tomb series with longer chronologies will provide data on diachronic development. DNA and stable isotope analysis will help with the identification of ancient migrations, which can be traced through analyses of modern human DNA providing insight to gene flow within this region. This avenue will then be extended to skeletal material. Strontium and oxygen isotope analyses detect mobility patterns and carbon and nitrogen isotope analyses inform about dietary habits.

Short lived domestic animals such as pigs are important in order to obtain the local Sr levels for comparison with the human remains. It is also intended to extend DNA analyses on specific animals such as the wool sheep and horses because there are strong indications that both were introduced from the Levant. For those species it would be particularly interesting to narrow down their origin more precisely. This project will also compare settlement – with ritual feasting material in order to discover specific requirements of ritual behaviour.