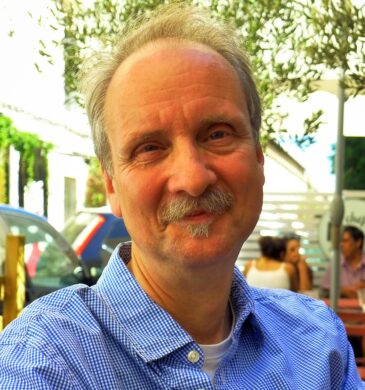 Our dear colleague, friend and mentor Jochen Holger Schutkowski lost his fight to ALS last year on March 30th 2020. As the Principal Investigator for the Hyksos Team at Bournemouth University he acted in his capacity as a dedicated, well respected collaborator, supported his team members in their research work as Professor of Bioarchaeology and Deputy Dean at the School of Applied Sciences, currently the Department of Archaeology and Anthropology of BU.
Holger’s special interest in the Near East spanned decades and his work on Near Eastern populations has included studies on palaeopathology, biodistance and dietary variability amongst human populations from the Neolithic to the modern period. In addition to publishing in high-impact journals, he also acted as associate editor for the American Journal of Physical Anthropology, Environmental Archaeology, and Bulletins et mémoires de la Société d’anthropologie de Paris, and he regularly frequented international conferences as a visitor and speaker.

The last time he was able to visit Vienna during the ‘10th International Congress on the Archaeology of the Ancient Near East’ in 2016, the ‘Hyksos Enigma Project’ had just started. The Vienna team recalls many inspiring discussions that in the years to come were continued either during personal visits in Bournemouth or via Skype or phone. He would have loved to be present at the teams’ workshop held in Vienna in December 2019, but his health did not permit it anymore. Nevertheless, he was present in spirit and in our hearts.
As we reported before, he was the first to be recognised with the Lifetime Achievement Award by BABAO (British Association for Biological Anthropology and Osteoarchaeology). The award was presented to him at the 2018 BABAO meeting in Cranfield, UK, at the end of the final conference session honouring his work and contributions to the field. As part of this, former students had sent in messages describing how Holger had impacted their life, both professionally and personally. Dr. William Pestle (University of Miami) quoted Henry Brooks Adams: “A teacher affects eternity; he can never tell where his influence stops.” He noted that rewards in the field of bioarchaeology do not come in the form of financial gain or fame. Instead, they come in the form of legacy. The messages Holger received speak volumes of the kind-hearted man that he was, whose legacy does not merely live in his professional work, ground-breaking as it was, but in the minds of the people he touched.
Beyond academia, he was also an accomplished concert violist. During his time at the Winchester Symphony Orchestra, he was known for “delivering solos in pieces such Elgar’s Enigma Variations with unparalleled expression and poignancy” (Darvill and Speith 2020:2).

He shall be missed but never forgotten!