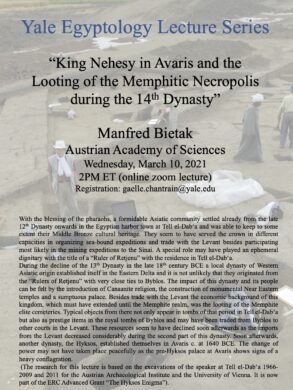 King Nehesy at Avaris and the Looting of the Memphite Elite Necropoleis during the 14th Dynasty
Yale University, 10th of March 2021 (20h Middle European Time)

Research in the last decades has revealed much more about the obscure 14th Dynasty than one could read in Egyptological treaties and textbooks. This is a short account on this subject as an excavator of the site of Tell el-Dab‘a/Avaris in the years 1966–2009 and 2011. Monuments of king ʿꜣ-zḥ-RʿNeḥesi were found scattered in Tanis, Tell el-Muqdam, Tell Hebwa and in Tell el-Dab‘a. The monuments at the first two sites were found dislocated, while at Tell Hebwa and at Avaris they most probably originated from local installations of this king.